Global business services firm Baker Tilly has released their latest edition of their ‘Global M&A Outlook’. The report provides in-depth insight into the state of the merger and acquisitions market and the expectations for the coming year. An overview of the main findings from the report is reproduced here in five graphs.

About $3 trillion in deals have been closed since the beginning of this year, making the first half of 2021 one of the best half-years ever. Deal values, in particular, have soared, while volumes have lagged slightly – especially compared to pre-pandemic levels. 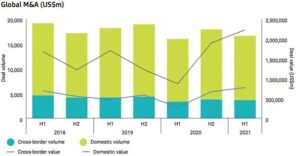 The deal value of cross-border deals has increased significantly from the first half of 2019 (up 63%) to reach $771 billion in the first half of 2021. Nearly half of dealmakers (49%) today focus their post-pandemic strategies on developed Western markets such as North America and Europe. 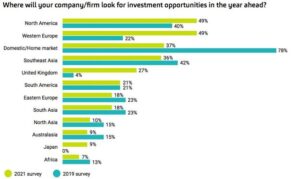 Adapting to changing consumer behavior and reaching new customers remain key priorities for many dealmakers (both 39%) when preparing their future deal strategies. In addition, many dealmakers (including 39%) realize that digital transformations are also needed to successfully position themselves in the current digital age. 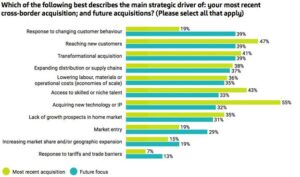 Many dealmakers agree that new tech solutions will be essential to drive organizational and sector-level change. More than half (55%) of respondents have already made such acquisitions as part of their digital transformation strategies.

More than half (59%) of dealmakers also expect good prospects for the Asia-Pacific region. This is mainly due to the lower valuations of acquisition targets (compared to more mature markets) and the long-term economic outlook in the region. 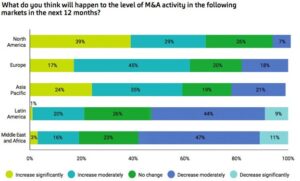 From a sector perspective, it is expected that the financial services sector in particular, holds the greatest M&A potential. After all, digital transformations are a hotbed for deals as the industry increasingly focuses on a stronger digital presence.

The energy, mining and utilities sector comes in second, as organizations in this sector are looking to sharpen their strategies and reassess their portfolios to streamline their operations. 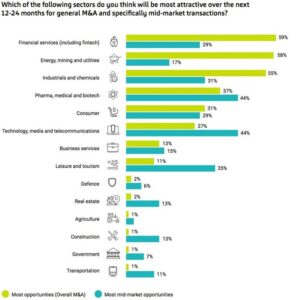 The pandemic and ensuing oil price crash has forced energy and commodities companies to put their finances in order, increasing divestments and sales.

Sustainability is another major driver of divestments – focusing on sustainability goals will cause companies to divest assets that are not in line with their ESG frameworks.

Earlier research by KPMG showed that the Dutch M&A market is also running at full speed. 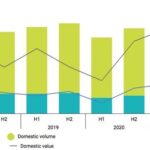 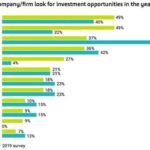 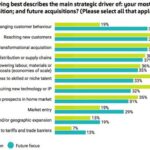 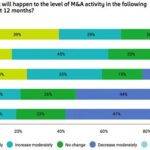 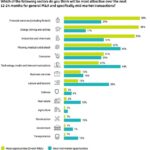