This is the outlook for the year ahead in terms of M&A. Despite the uncertain geopolitical landscape, inflationary pressure and rising interest rates, predictions are cautiously optimistic for varied opportunities in the next year. 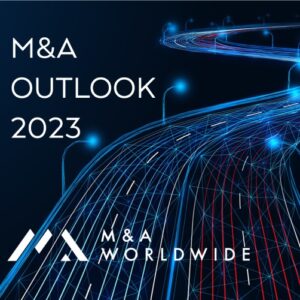 The 08 trends to monitor include:

Back to the “small item effect”

Buyers will increasingly focus on smaller deals, as recessionary fears trigger a “small item effect”: when economic downturns lead to a rise in spending on smaller, more affordable — rather than big ticket, more expensive — goods. For the first time in over three years, no mega deals (valued over $10 billion) were closed during the third quarter of 2022, and large deals (valued over $1 billion) were significantly down compared with the same period in 2021 (49 versus 67).

A strong year ahead for energy and infrastructure

Energy producers are generating record revenues and Energy and power is top sector in H2 2022.

Oil futures remain high, albeit not quite at the levels they reached during the summer of 2022. Energy majors’ growing cash reserves and desire to decarbonise their portfolios make them prime candidates to pursue renewables deals and invest in new technologies throughout 2023 and beyond – provided their shareholders sanction bids rather than push for funds to be returned through buybacks.

Deal data for H2 shows energy and power as the biggest sector for M&A by value.

The international focus on sustainable, secure energy supplies points to continued investment in renewables, with infrastructure investors set to remain among the most active financial sponsors.

The U.S. Inflation Reduction Act will drive further secondary trades, while financing for energy and infrastructure acquisitions – which have longer hold periods than some other types of assets – is less exposed to current shocks such as the war in Ukraine.

By contrast, the syndicated market for leveraged loans has largely disappeared, putting a brake on private equity deal-making.

Arrangers are finding it almost impossible to price debt amid the threat of escalation in Ukraine, which in turn is making deals even harder to price.

Looking ahead we expect sponsors to continue creating value through complexity – for example by targeting undermanaged carveouts or aggressively going after two or more complementary assets at the same time.

The Middle East, Southeast Asia, Japan and the UK will be hotspots of activity

From a regional perspective, we expect the Middle East to remain a nexus of activity alongside India and Southeast Asia.

Japan – one of the few markets to see a rise in M&A in Q4 compared to the previous quarter – is another market to watch with the country’s corporates overcoming their aversion to sales and the yen down against the dollar.

Tech M&A in 2023 will focus on AI, digital assets, NFTs and the Metaverse

While tech stocks have fallen from their pandemic-era highs, strategics remain well-capitalised and will be active acquirors in the year to come.

We expect crypto assets to be sought-after despite recent market volatility, with trading platforms set for further deal-making.

One area where there could be a spike in 2023 is mergers among private tech companies. In an interview with The Information, Goldman Sachs bankers told explained that consolidation among private tech firms could pick up next year. This could be particularly true for those start-ups who had to alter their IPO plans. These companies are likely exploring alternative exit strategies, and decreased valuations will make mergers in this space more attractive.

Additionally, The need for speed in digital transformation across all industries, accelerated by an era of volatility, will keep dealmaking front and center, with a wave of acquisitions in the artificial intelligence and machine learning markets expected in 2023. Whether adopting new technologies and talent or reaching new markets, M&A continues to be the fastest way for businesses to transform in order to remain relevant and resilient in today’s fast-changing world.

The difficult operating environment will drive an increase in companies jettisoning non-core assets in the pursuit of long-term value creation. Some deals will be strategic — such as energy firms continuing to divest carbon intensive assets — while the ongoing economic uncertainty will force other companies to sell assets — the retail and leisure sectors often having a higher operating leverage. This can create opportunities for buyers to expand product lines, services or supply chains at a reduced rate.

Hit by multiple supply chain disruptions during the pandemic that are set to continue in 2023, companies will look to M&A transactions to boost their operational resilience. Vulnerabilities that continue to deliver distressed deal flow in the worst-affected sectors will also be catalysts for businesses to reinvent their own supply chain networks. By onshoring or nearshoring suppliers closer to the point of production, businesses will aim to achieve greater security and resilience.. Cross-border M&A activity has decreased in 2022, reflecting economic and geopolitical upheaval on the world stage. The pursuit of stability and predictability is likely to lead to more deals among trusted partners, signalling a shift to more selective “friend-shoring” transactions in 2023.

ESG continues to be prevalent

ESG scrutiny on deals will become much more prevalent in the next year, with expectations rising on compliance in all aspects of deal-making. With increasing numbers of investors seeing ESG as a fundamental driver of financial success, businesses will face mounting scrutiny and pressure for transparency on climate risk, social justice, sustainability and corporate governance. “Green” due diligence is, without a doubt, on the up. There will also be increased scrutiny on social issues — like diversity, equity and inclusion and worker well-being in the upcoming year.

In conclusion, despite a fall in deal-making in the second half of 2022, we expect activity to strengthen in the year to come.